Peacemakers in the Middle East and Our Community 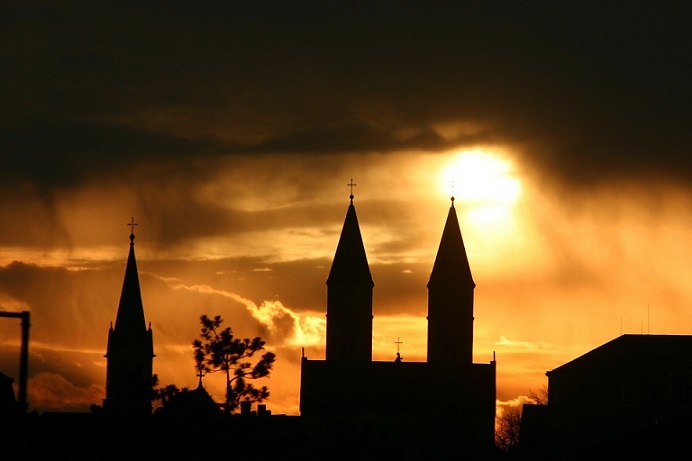 Blessed are the peacemakers for they will be called sons of God.

I spent seven weeks in the Middle East this summer working on an archaeological expedition and leading a study tour. The underlying tensions caused by bad economics, political disputes and cultural differences continue to boil. From the dig site in northern Jordan we felt and heard bombs dropped on the town of Dera’a across the border in Syria. From the top of the Tell (mound of occupational debris accumulated over centuries), we could at times see rising plumes of smoke. Later in Jerusalem, we never saw the contrails of rockets from Gaza, but we heard explosions in the night. We did not have to watch the media images of carnage, tears and anger to know that war raged. The tall concrete wall we passed through on the way to Bethlehem and armed checkpoints were poignant reminders of the divisions that exist.

One of my Muslim co-workers in Jordan observed that the regional situation is like Maqluba, a popular Arabic dish in which rice, lamb, fried potatoes, cauliflower and eggplant are placed in layers in a pot which when cooked is flipped upside down on a serving dish. As a Christian from the United States, I agreed with him. While a plate of Maqluba is a tasty mess that will give you energy to work hard, the world was not intended to be a mixed up mess. When God finished creating, He assessed things as “very good” (Genesis 1:31). People were in peaceful fellowship with Him and each other.

Sadly, choices selfish people make have turned the world topsy-turvy (Genesis 3:6), and they keep making such choices. People are at odds with God and each other. Some individuals fatalistically accept the world’s predicament as being normal and unchangeable. They express sentiments like, “People over there in the Middle East have been squabbling for millennia and they will do so forever, or until they destroy each other. Stay away and you will be okay.”

Others like Gabriel, a businessman I met in East Jerusalem, do not accept the conflict as being inevitable or eternal. He knows that God has provided a remedy and power to effect peace. So, he quietly loves people and wages peace rather than war. He has not emigrated with his family to get away from the troubles among his neighbors. While he is a Christian, he employs Muslims and does business with Israelis, fellow-Arabs and foreigners. In the course of his business, he is deliberately working to break down walls of suspicion by crossing tense boundaries, engaging persons from all sides as people made in God’s image.

He recognizes that peacemaking is not something that should be left only to professionals and governmental officials. Such grassroots peacemakers run the risk of raising suspicions and becoming targets from many directions, but they do not let fear behead their transcendent purpose.

The spread of a genuine love for people and resultant local-level grassroots peacemaking is the key to resolving conflicts among entrenched opponents whether “over there” in the Middle East or “right here” in our community. In order to bring down the walls of suspicion and hatred, loving people on one side must cross to the “other side” and get within listening distance of combatants. We do not have to carry heavy-caliber guns or have the name of an angel to promote peace and to work quietly to restore things to the way God intends, right side up.